The Life of an Engineering Dude

I would like to let you all know that I’ve become an Engineering Graduate in IT Major. Finally, all those hard working days of curricular and extra-curricular assignments during these 4 years have come to an end. Just Feeling Emotional these days.

Anyways, these college days had brought back the artist in me which was lost in the darkness for a while. You have already got me through my plenty of artworks done during this timeline. Well, a big thanks to those boring lectures, free classrooms, college fests and all those appreciation and criticisms by people. They were the major influence for my motivation and inspiration to imagine bigger and progress higher.

As a matter of fact, I would like to share my artwork with you all right now. This is a simple cartoon sketch based on the major stereotypes I’ve seen so far in my college. I’ve pencil sketched a cool engineering dude (resembles mostly with me) with multiple hands holding various things defining a particular stereotype (resembles like any Indian Goddess). Moreover, the stereotypes have been written with that good ole and the obvious Graffiti Style Tags.

So, this is how it looks like when all the stereotypes come in a single master piece. 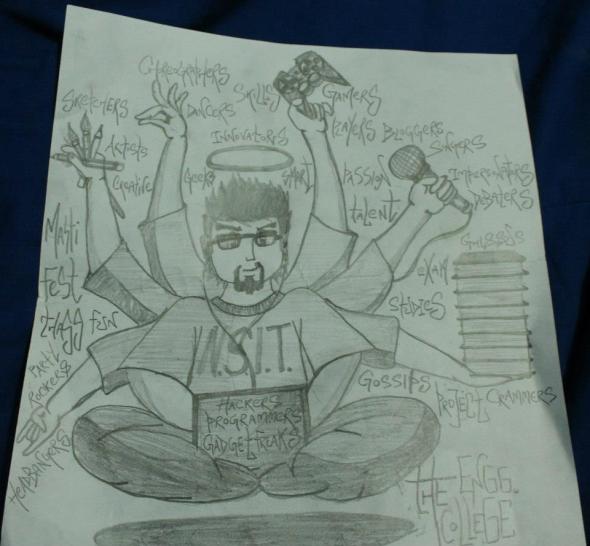 Actually, this proposed idea was sketched for our class official T-shirt as a memento. Many people liked the artwork, but were unsure about its final appearance in a shirt. Unfortunately, this idea was dropped due to lack of response and interest in participation from the class. However, I discovered another idea (with the some help of some of my classmates) which finally became the official shirt of our class. I’ll tell you the complete story some another day.

PS:- There are plenty of artworks made during my college days, which have not been posted here yet. I will post them as soon as possible. So Fellas !! Stay Connected. Stay Updated.