Guess What Folks !!!
Finally, My very 1st Game Program in C/C++ called “ The Rattle Snake Game ”, on which I’ve already told y’all about in my previous post, has been completed. It took me about 2 Weeks, let say 14 Days, for making it happen.

From since Day One till the End, I was constantly thinking and working upon through this Day-Night, using the concepts related to this game like- Designing The Intro and The Outro, Animating Snake Motion, Updating Score Board and Calling Other Menus and Sub-Menus. For this, I’ve used most possible Proper and Logical Algorithms in order to implement such concepts. I’ve also simple Graphics, which is basically has C Header file “GRAPHICS.H”, through which I had done the animation part easily by calling its concerned functions. Now, that’s kinda fascinating for the Gamers. Moreover, I’ve made my Game Program Well Coded, Nicely Indented and Minimal Memory Space as possible. Even I’ve divided it into various Modules (Functions), so that my other fellow Programmers could easily find it readable enough and understand the logics which I had used so far.

I won’t gonna tell you how to play it as it’s very simple Game which you might have played during your Kindergarten days. Instead I would like to throw some light on this Game in certain small Snippets.

This is the Intro of this Game, where you could see a border made with Snake’s body, alongwith the Title Name of the Game, the Programmer’s Name. (Off-course It’s me :P) and also a Blinking Message at the bottom asking for pressing any Key.

As you can see now, it immediately asks to Enter your Name after pressing any Key. When you’re done with entering your name, simply press Enter key to move further. But Remember, You could use less than 10 characters only. Otherwise, you would be asked again and again for entering your name under 10 characters, alongwith an Error message. 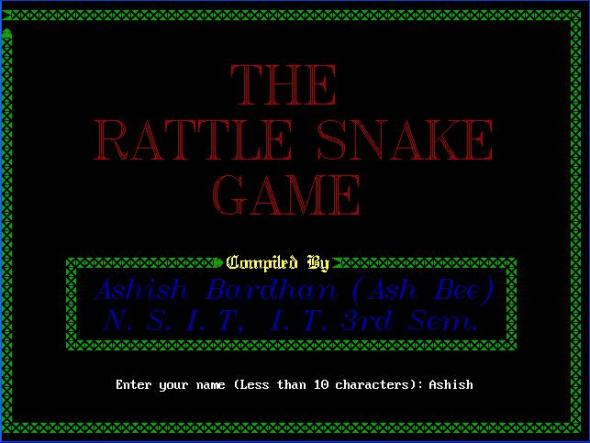 Now, you would love to see the following thing because it’s the Main layout view of the Game. I’ve made a Sidebar at the right. It consists of an Instruction Menu (with the commands and keys for playing the Game) , a Scorecard (which keeps on updating whenever the Snake eats the Egg) and a Blank Space left for displaying Messages. You can move the Snake by the arrow movements.

Game Begins and Snake Approaching Towards the Egg

Well, When the Snake has eaten the Egg, the score gets updated which was higher than the initial High Score (Zero). The High Score would now get updated with a Navy Blue Text Background. However, its length would increase after consuming 2 Eggs. 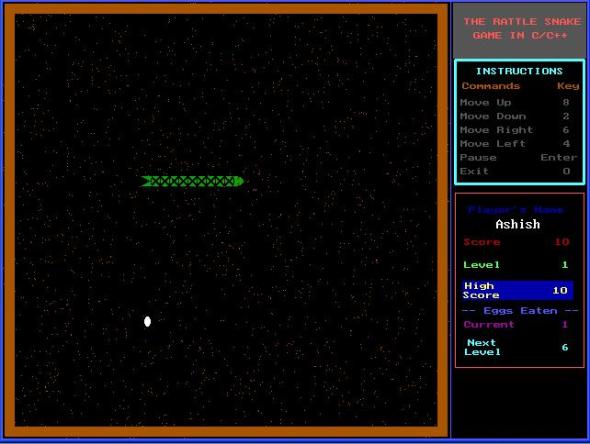 Snake has eaten the Egg

When you’ve reached any Level, i.e. eaten the numbers of eggs so far to reach the next level, You would be getting a Level bonus on clearing the previous Round. Your speed gets more increased after Crossing any Level. 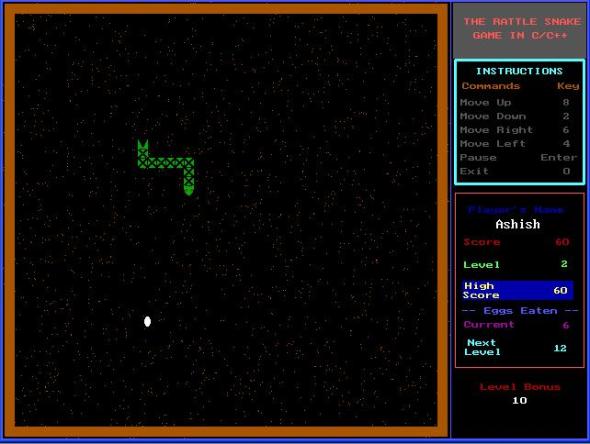 As obvious, there are two ways of getting the Snake Out, i.e. biting either the walls or itself. For that a message would gets displayed with a message “Ouch !!” followed by “Gameover”. 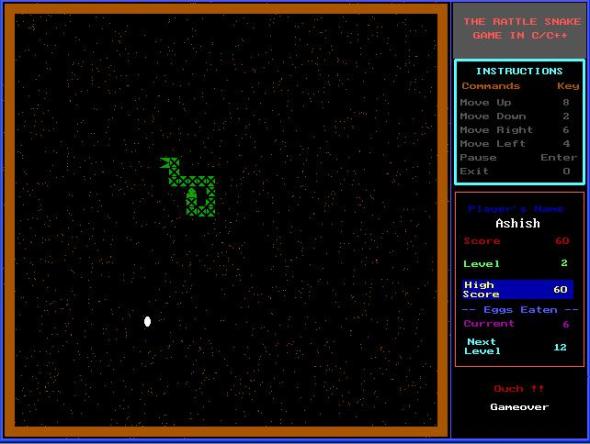 If you Quit yourself by pressing ‘0’ key manually, you’ll kicked out of the game and similarly a message would gets displayed with a message now calling “Exit !!” followed by “Gameover”.

Whenever your Game gets Over, by either the above ways, you would further be asked for Continue again. Press ‘y’ for Yes or ‘n’ for No. If ‘Yes’, the new message “Loading” would be displayed. Within few seconds, a New Game would be uploaded on a Fresh screen resetting all the Scores and Levels to its initial value except the High Score. 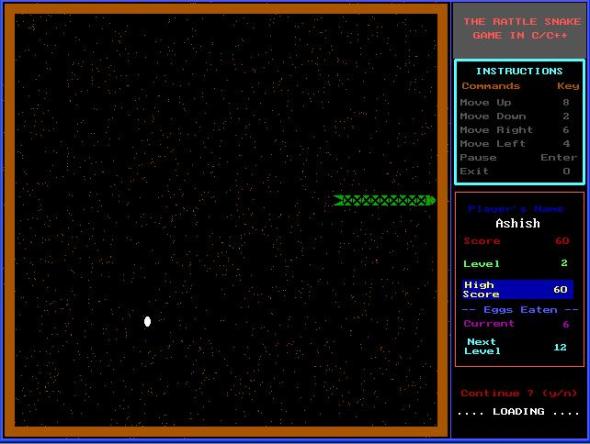 However, On pressing for ‘No’, the new message “Exiting” would be displayed. After that a fresh screen appears with similar Design like the Intro had and also an Outro message, thanking you for playing my game.

Not Continuing the Game / Exiting

Post your Feedbacks for this very Simple Game, with Simple Graphics and Concepts by your very Simple Blogger, Ash Bee. 8)

PS:- Don’t criticize me for making such a simple game. It’s my very 1st step in Game Programming and Animation. I would definitely go further on this thing since I’ve already laid some interest over it. Hopefully, I would increase my Level to make some Brilliant Games on upcoming days.

Well Guys !!
After studying and practicing more like HELL in Programming for years, I’ve finally came to one of its very cool and fascinating application : Gaming, on which I’ve made – A Rattle Snake Game in C/C++ Programming Language.

It’s a very Simple and Common Game, not that complicated and even not that challenging. However, It’s a great step to Get Started with Game Programming in C/C++. I’ve made this Game using logically sound Algorithms, Concepts on Arrays, Structures and Loops, and also DOS Graphics. However, It requires some nice Skills and more Practice to Built and Run such a program.

I’ve just done the Gaming Part, where you’ll get to see the whole body of the Snake (including its Head and Tail as well :P) moving accordingly to Player’s Key Movements.The Snake’s body gets increasing after consuming the Food/Egg on its way,which is quite animative. As obvious, the Game gets Over, when the Snake structs the Walls or even its own body foolishly :P. Moreover, I’ve designed an Instructions Menu for getting an Help in moving the Snake and a Scorecard which would keep an updated score during the Game, which hopefully would be an attractive and helpful thing to get notice upon. 8)

I would upload all its screenshots probably on my upcoming Post.

So far, I’ve laid emphasis on the Gaming Part,which has been completed and running successfully. But, Certain Animations are still required to make Game Intro, Menus and Outro are yet to be done. So, There’s an unfinished job for completing it in a whole. Hopefully, I’ll be able to complete’em just before my College Holidays.

As a matter of fact, many Elite Programmers have made so even more better than me, on various Programming Languages like – JAVA, PASCAL, C#,FORTRAN, PIKE, PHP etc. alongwith some  Modern Graphic Techniques like API, OpenGL etc., which are quite more compatible to Run successfully on my Platform as compared to mine.

But the purpose of making this Game, is simply understanding all the concepts which I’ve leaned so far and exploring furthermore in the filed of Game Programming.

P.S. :- It’s very very easy to play Game in your PCs and Laptops. But it’s F*cking too Hard to make such Games through Programming Languages.