Tribute To a LEGEND

Well Guys !! Today is the the Grand B’day of one of The Most Legendary Cricketer Icon of all Time from India – Sourav Ganguly – The Prince of Kolkata or The Bengal Tiger or simply call ” DaDa “. It’s not only gonna be Party in Kolkata, but also a Grand Fest for those million Cricket Fans who believed him, worshiped him as God and adored his excellence and perfection in Cricket. 😛

Well on his 39th B’day and also on behalf of all DaDa fans around the world, I would like to give him a special Tribute to him through this special Video. Take a look. 😉

‎… }{aapy B’day Sourav Ganguly Dada .…
Hope your life would still and forever become
as SWEET as MISHTI DOI
as SPICY as JHAAL MOORI
as JUICY as ROSHOGULLA
as MILKY as PAAYESH
as DELICIOUS as AALU TARKARI
as HARDCORE as KAATHAAL
as HUGE as BARDHAMAN RLWY. STATION
as PURE as GANGA RIVER
as HOLY as DAKHINESHWAR MANDIR
as FAST as SHEALDAH LOCAL
as EPIC as BARRACKPORE !! 😉

It was just the beginning of the year 2010 and the Birthday of our very very good friend, Rohit (a.k.a Driver a.k.a Kala Rohit ) 😛 was about to come. This probably means that we would gonna celebrate his B’day with loads of fun and excitement to kickstart 2010 – the year with full of excitement. Actually His B’day comes on 10th of January. But since It was Sunday, we decided to celebrate on some another day in College. And, this was the moment where we declared ” The Driver B’day Bash “ on 15th January, round the corner. We published and bragged this news among our 1st year mates and even online in Facebook and Orkut. It was just a Promotion and Publicity of his B’day more special.

15th January. The day finally came. I just reached to my classroom in the morning and got shocked to see its changing landscape. OMFG !! The class was highly decorated as It was a special event. Balloons (naming “Kala Rohit” and “Driver”) were attached with the ceiling fans. ” Happy B’day Driver ” was written on our Blackboard. It was looking very. Even our Programming Teacher appreciated it, and further quoted that we’ve taken more than enough inspirations from “3 Idiots”. After the lecture, it was finally announced by our classmates that It shall be a Whole Day Bunk for celebration. And we were sent to Nesci grounds, where this incident was about to happen. I found that something Fishy would be happening next and even was more eager to know what more surprises my friends have made for Rohit. So, I went to Parking Lot, where Rohit’s car was there. 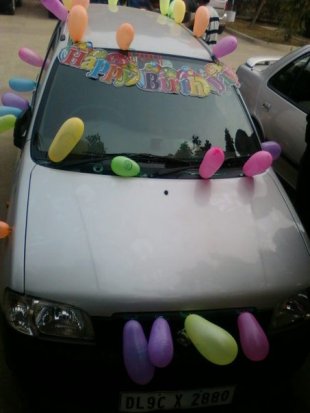 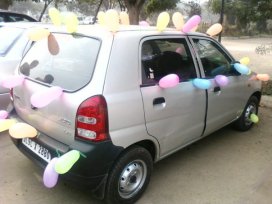 I’ve got double amazed that they didn’t even spare his Car. It was Fully- Covered with Balloons and a “Happy Birthday” signs on the front window.  It was almost looking like as if  it was made for Rohit’s Wedding. 😛 But there’s yet another present , indeed funny to watch, awaited for him as well. You would probably be guessing what we had done with that. 😛

To make the event even more exciting. First of all, our friend Gaurav (a.k.a GB) performed some cool Bike Stunts with Wheelies and Stoppies, to entertain us. Then, we decided to its time to have Blast as all the IT boys have already gathered the area. Since, the decoration was done, time to show this B’day car to other NSITians as well. Infact we made Rohit to sit on the top of his car, to have his Grand Birthday Entry from Parking Area to Nesci. And this is how it started.

And this is how his B’day was celebrated, with lots of “Masti” and Fun. His b’day was celebrated with a BANG. He had his GRAND ENTRY sitting over his Car, got a chance to cut Special B’day Cake, Got Cake on his Face by everybody and Even got slimed with our Gift – The Mud Pack. Moreover, he had been given tons of B’day Bumps from all of us, which I don’t think he might have got that painful from anybody else before.

Pheww.. Thank God !! My B’day comes during Summer Holidays, NOT during College Days. Otherwise my ass would have got whipped like his. 😛

However, It was so fun to watch and experience such an amazing EPIC B’day Party. I am 100% sure about that it would be the Best B’day Party Bash ever has been made in the history of NSIT.

Well Folks !! I’ve made this kinda Art already on my previous post. 😉 😛
But once again, I’m gonna show my Collection yet again. 8)

So this time, I’ve made yet another ” Calligraphy ” using ” Electric Wires “ this past Thursday in my Digital Electronics Lab. , Just dedicating for my College-mate and a very good friend : Akshay “CODER” Chadha, as a Birthday Present.

Take a look what just I made for him. 😉

Infact, He immediately accepted my Present as liked it so much that I had made something for him. I’m obliged with such appreciation that I received by him. 😛

Thanks for acceptance and appreciation Mr. CODER !! 😉
and once again, A Very Happy Belated B’day to you Bro !! 😛