Well, This week is strongly dedicated to the Band called ‘Megadeth‘. This is the band which I’m listening for some years from the day since I went to college. You already know through my previous post that what I used to listen back days when I was a school kid.

After Listening to Metallica a lot, I really got bored. That doesn’t means that I don’t wanna listen to their songs anymore. I wanted some more. I’d even downloaded their Latest album ‘Death Magnetic‘, but I didn’t worked out very well. It wasn’t like their previous hardcore albums.

Now I really needed something else to listen from someone else. Then, I discovered ‘Megadeth’. This is the band which has some amazing guitar riffs and drums beats. Apart from those, their vocals is also the thing which makes them unique. Moreover, their front man ‘Dave Mustaine‘ used to be in ‘Metallica’, but was later kicked out from the band. And therefore, he formed his own band.

I still remember the moment when I first listened to their song ‘Holy Wars .. The Punishment Due’ from their album ‘Rust in Pieces’. I really got so adrenalined and fascinated with this song as it was really so amazing. That long intro guitar solo was so Amazing. I head-banged a lot during that time. And besides, the lyrics were nice as it indeed tells the reality. In short, the song is Epic. Then I moved to more Megadeth songs like – Symphony of Destruction, Peace Sells .. But Who’s Buying?, A Tout Le Monde, Skin O’ My Teeth, Headcrusher, Public Enemy No. 1 and many more. Now, I am also a Megadeth Fan.A lot of verbal battles I’ve seen throughout the Internet between the fans of Metallica and Megadeth. But since I am unable to judge the best between them, I like both.

Coming back to my artwork. It’s just like what I’ve made previously. The Artwork of logo this legendary band has been drawn with Ball-point pen on an A4 Sheet, along with the names of their famous songs (around 50-60 I guess), written in (my personal favorite) Graffiti Tags.

This one is very Amazing Song sung by American Thrash Metal Band called ” Megadeth “ of their sixth studio album called ” Youthanasia ” of year 2006. A nice lovely song sung by The Lead Singer ” Dave Mustaine ” who used to play lead guitars for “Metallica” during its early formation. Moreover, Nice guitar covers by David Ellefson with Bass and Marty Friedman with Rhythm verses at the sides making it worth listenable. 😉 \m/ 😉

The main Reason I’ve chosen this song that You Oughta Listen is that apart from their Thrash Metal verse and war-based theme, this song describes about the feelings and last words you want to tell when you are gone away from your loved ones. This is an opportunity for the deceased to say something before they go. It’s sometimes hard to imagine even such verses can be produced by such hardcore metal band. Well That’s the genius Dave Mustaine.  😉

However, this is the song which I would like to play during my funeral. 😉

Just go through it’s lyrics, You’ll get to know more about it. Meanwhile, Take a look on this song. 8)

Bonus !! Bonus !! There is another version of this song “A Tout Le Monde(Set Me Free)” released in 2007 in their 11th studio album, United Abominations, with Lacuna Coil front woman Christina Scabbia as the guest featuring singer.

So as you read this know my friends
I’d love to stay with you all
Please smile, smile when you think about me
My body’s gone that’s all

Megadeth – Graffiti on Board

I’m back again with my artwork and I guess it’s been a long time around 3-4 months of hiatus. Kinda busy in Summer Internships and Placement Session. I know it really sucks in being too much work alcoholic and plus, I can’t keep my promises that much. Despicable me !! 😛

But what amazes me that even in my absence, my blog count is still running with a pace of around 80-100 hits per day and 2500+ hits every month. That’s a nice web stats as this really proves my blog followers and even new visitors are stopping by here without my promotion in other websites. That’s the only thing which makes me to come here again whatever the lap time takes.

Anyways, back to business. Well this time, I’ve made a simple Graffiti Calligraphy dedicated to one of the Thrash Metal Legends “Megadeth“ in my familiar college class board within 20 minutes. This band is really awesome. I am really in love the guitar tunes by their frontman Dave Mustaine. Some of my favorite songs are : “Holy Wars“, “Symphony Of Destruction“, “Mechanix” and “Public Enemy No.1“. Plus, they are going to perform a gig in my city Delhi tonight. Yippeee !! XD 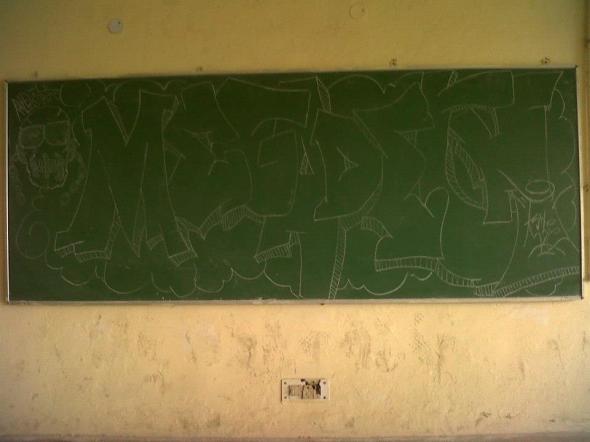 Again, the college board  has been screwed.