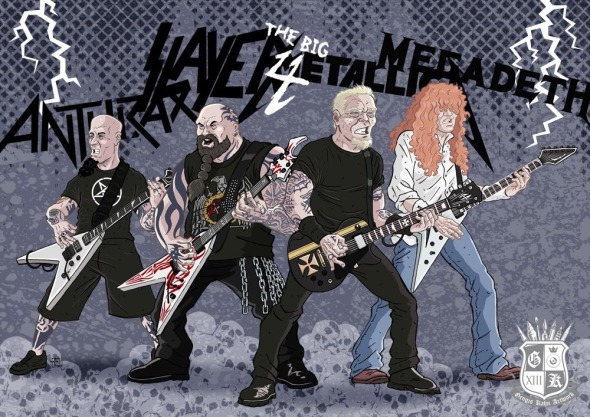 Well, This week is strongly dedicated to the Band called ‘Metallica‘. This is the first band which I’ve followed first when I was around 14. Before that, I’ve hardly known a little bit of rock songs that I’ve either listened on the Radio or watched its Video on MTV or even randomly from a Hollywood Movie or WWE, as the background score. Just few names like – AC/DC, Limp Bizkit, Linkin Park and Bryan Adams, I was aware of them only. I used to get  some goosebumps those days (and still now sometimes) whenever I’ve listened to such heavy songs.  🙂

But Honestly speaking, I wouldn’t have discovered Metallica myself that time until my friend gave a complete CD pack of their songs. After looking around at my so-called choice in such music, he strongly recommended to listen to it like a True Metal Fan.

I still remember that Summer of year 2005, when I had my first desktop at home and got plenty of PC Games, from my dear friend. And after getting a complete collection of Metallica from my Metalhead friend, I’ve got a good shit to listen. I used to listen Linkin Park a lot, even before I had my PC. But still, I preferred to listen to Metallica more, just because it was so awesome. So Heavy, So Energetic. Simply Amazing. While listening to it, some people around me used to think that it is too Loud, Noisy, Mad, Arrogant, Violent and Anti-social, because Bollywood and Pop songs are the mainstream in India. But I hardly bothered and still I do.

I guess, 2005, it was indeed the year which had brought a change in me. And as soon as I got more versed with my PC and permission for Internet Connection from my Dad later in the year 2007, I’d explored more stuffs like this, which eventually had started changing me a lot in the knowledge of Music (specially Rock, and more precisely Metal) to a level where I am right now.

Well, this is my prolonging passion and addiction for Metallica and for other Rock Bands. Coming back to my artwork. It’s just so simple. The Artwork of logo this legendary band has been drawn with Ball-point pen on an A4 Sheet, along with the names of their famous songs (around 50-60 I guess), written in (my personal favorite) Graffiti Tags.

It’s getting too Damn Hard to bear.
Those days are coming near and near,
As It’s The Worstest Days of The Year,
And your Heart just trembles with fear !!

It’s seems Like, The clock now-a-days..
is too much Tick-Tocking ,
As Examinations is going 24X7 in my Mind …
Too much vigorously Knocking !!

Too much to study for the Exams
Learning all the concepts of every single bit
The Syllabus is too lengthy,
It’s hardly gonna complete.
Need to pay attention from Today onwards,
Coz’, It’s fucking useless to Study at the Last Minute !! 😛

Need to clear all those Examinations,
Just for a while, Suffer That Bit Torcher and Pain,
Otherwise, Would definitely FAIL for sure,
And have to face it again next again !! 😛

Though, Bit scared from such evil threats,
not having any place to stand tall ,
Still, I Don’t give a DAMN about it,
and even not giving up so easily at all !!

Though the days of Depression n’ Insomnia
might have been back again,
You can’t easily move on,
But It’s not impossible that much
Just prepare myself Possibly the best
and even get practiced harshly,
Physically, Mentally, Emotionally,
And so Eventually,
Not Mugging like a Jackass Moron !! ;P ;P

In the meantym ,
I wish y’all the Best 2 awl ma fellows… ; ) ; )
awl we need out there is a damn Luck ,
Just focus n’ concentrate on your studies
More and More and More and More,
Yeah !! Infact , now even I feel that …
Examinations really sucks the Core !! ;P ;P

And By the Way Fellows,
if You’ve got such threats from Mr. Examinations
Simply Don’t pay attention to it
Try to be fearless n’ stand tall ,
Just Focus on your Studies and your Grades
Please, Don’t Let your Future on the Downfall !!! 😉 😛

All the Best For The Exams

Selected for :- Thursday Poet Rally Week 32 by Jingle and # 104 The Monday Poetry Train

Thanks to Jingle for nominating and giving The week 22 Perfect Poet Award.

As for Week 33,  I nominate Sumit Sarkar for the Perfect Poet Award.

Happy Rally 2 You All!