I’m back again with my artwork. I wanna tell y’all something. Few days ago, I’ve seen a music video called “In My City“ by model-turn-actress-turn-singer Priyanka Chopra featuring Black Eyed Peas‘ singer Will.i.Am. In my opinion, the music is really terrible just because it is modern commercial sellout, that same old shitty work with autotune vocals and party beats. Moreover, its music video is even more terrible, with worst choreography and background scene. The annoying part of this video is that she bragged a lot of things about her partying life in her city (which was supposed to be her home town – Bareilly or working town- Mumbai, but the whole video shoot happened to appear somewhere in Los Angeles). Facepalm.

Just like Ashley Tisdale, she is also nice actress (won’t say the best actress ever :P), but not really a good singer. Moreover, she sold herself out with this annoying song without even showing her real roots. But hardly this commercial Entertainment Industry and the butthurt Priyanka Chopra Fan base (I prefer calling such people as Fantards 😛) gonna understand the fact.

The main agenda of above mentioned story is to show how people get away from their roots and pretend to be someone else, just to impress the modern crowd. I could go on more with other examples, but would tell that some other day.

Anyways coming back to my art topic. After getting pissed with that annoying and delusional music video, I’ve checked down my art archives searching relevant to my roots in my city – Delhi.

Well !! The artwork which I’m going to showcase, I’ve made quite a year while practicing for my very 1st Graffiti Battle in Hip-Hop Jam. I’ve made the cartoon sketches of various attractions of Delhi – Red Fort, Lots Temple, Jantar Mantar, Qutab Minar, India Gate and Delhi Metro, in the background and a graffiti guy (actually me :P) spraying a Graffiti art “Delhi” on the wall, in the foreground with the help blue ball-point pen.

Now since y’all know about my passion and obsession with Graffiti and my residence in Delhi.
So then fellas, take a look on the artwork. 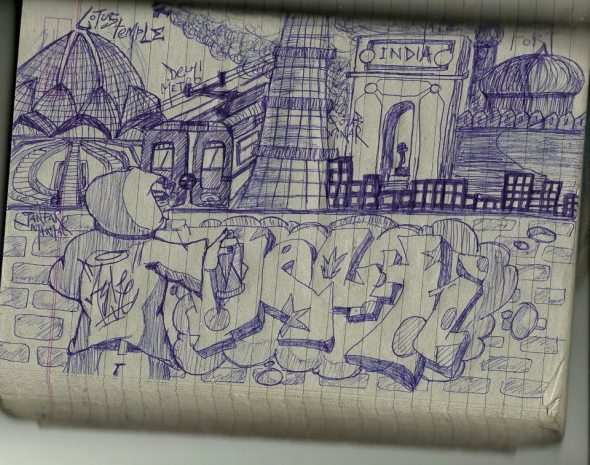 Well !! This is my City and these are my roots. I love keeping them real, unlike pretending like any crazy Bollywood Actress posing to be a professional singer.

In the Rock/Metal World, Legends like Anthrax
The Least Popular among The BIG 4 Bands of Thrash Metal
Came back after 8 Years, releasing Worship Music in 2011
which became the Best Rock Album of Year 2011-12,
highly acclaimed and praised by the millions worldwide
though screwed by those sellout Kerrang! and Revolver Awards.
Well this year, Grammy Award still appreciated their work
but let it compete against the other Great ones in Hard Rock/Metal Industry
just because, they had only 1 damn award to honor the complete culture.

Meanwhile, In the Pop Mainstream World, Katy Perry ..
One of the Highly Overrated Talentless Hacks of this Era
Makes a shitty album Teenage Dream in 2010
Selling every single and still Extending this shit
Ties the Record of highest Billboard Single Hits with R.I.P Michael Jackson
And above all, Grammy Award still appreciates her work
nominating consecutively for 3 years with other Hyped ones.
just because, there are plenty of awards to honor the mainstream culture.